Springhill Cemetery was established in 1836, with the founding of Desoto County and its seat, Jefferson, now known as Hernando in the newly-taken Chickasaw Cession. It was the public burial ground for residents of the town, free and slave, until churches and other groups established separate cemeteries. By the time of the last major yellow fever outbreak in 1878, there were hundreds of graves, many or most unmarked today. Only 6 monuments date after 1900. During the later part of the 20th century, the old public burial ground became a pasture and woodlot. Today, efforts are being made to conserve the 100-odd 19th century monuments, conduct historic and archaeological investigations, and beautify the site with native vegetation and Victorian ornamentals and make it an historic and recreational asset for all residents.

Many early officials of the city and county, as well as merchants and tradesmen, and their families and servants are buried here. While there are only around 100 grave markers, and these mostly represent the most prosperous families, there are probably 500-1000 burials present on the site. Probably, many graves were marked only with wood boards or posts, plantings, or earthen mounds decorated with the deceased’s cup, bowl, bottle, or other personal effects like conch-shell calling horns. After Emancipation, several prominent Freed men and women had monuments erected to their memory.

Nineteenth century Mississippi had very high mortality rates—so high that life insurance companies added a surcharge for policies for policies in places like Mississippi. Infant and childbirth deaths were especially common. Many deaths can be attributed to two common mosquito-borne diseases, malaria and yellow fever. Slaves and poor white laborers in particular were exposed to lumbering and ranching accidents. Frontier housing was often primitive. Doctors were few, and their knowledge was often limited. Most people could only obtain plant medicines.

Origin and Decline of Springhill Cemetery

It is noteworthy that only 1 of the 10 earliest marked interments was a male (an 11 month old infant). As adult white men controlled economic resources, it might be asked why only women and children were memorialized. Perhaps husbands’ and fathers’ guilt at having removed them from their homes and families and brought them to die in the wilderness is the easiest explanation, but not one that is testable. It is also likely that a wife having died first would be supplied a monument by her husband or father, where a widow and orphans may not have the resources to place a monument if the husband died first. In this period, widows were allowed only a small portion of the estate (minimal household/kitchen goods, food for a year, tools for one hand) as a dower when estates of the intestate or debtors were sold at sheriffs’ or trustees’ auctions. 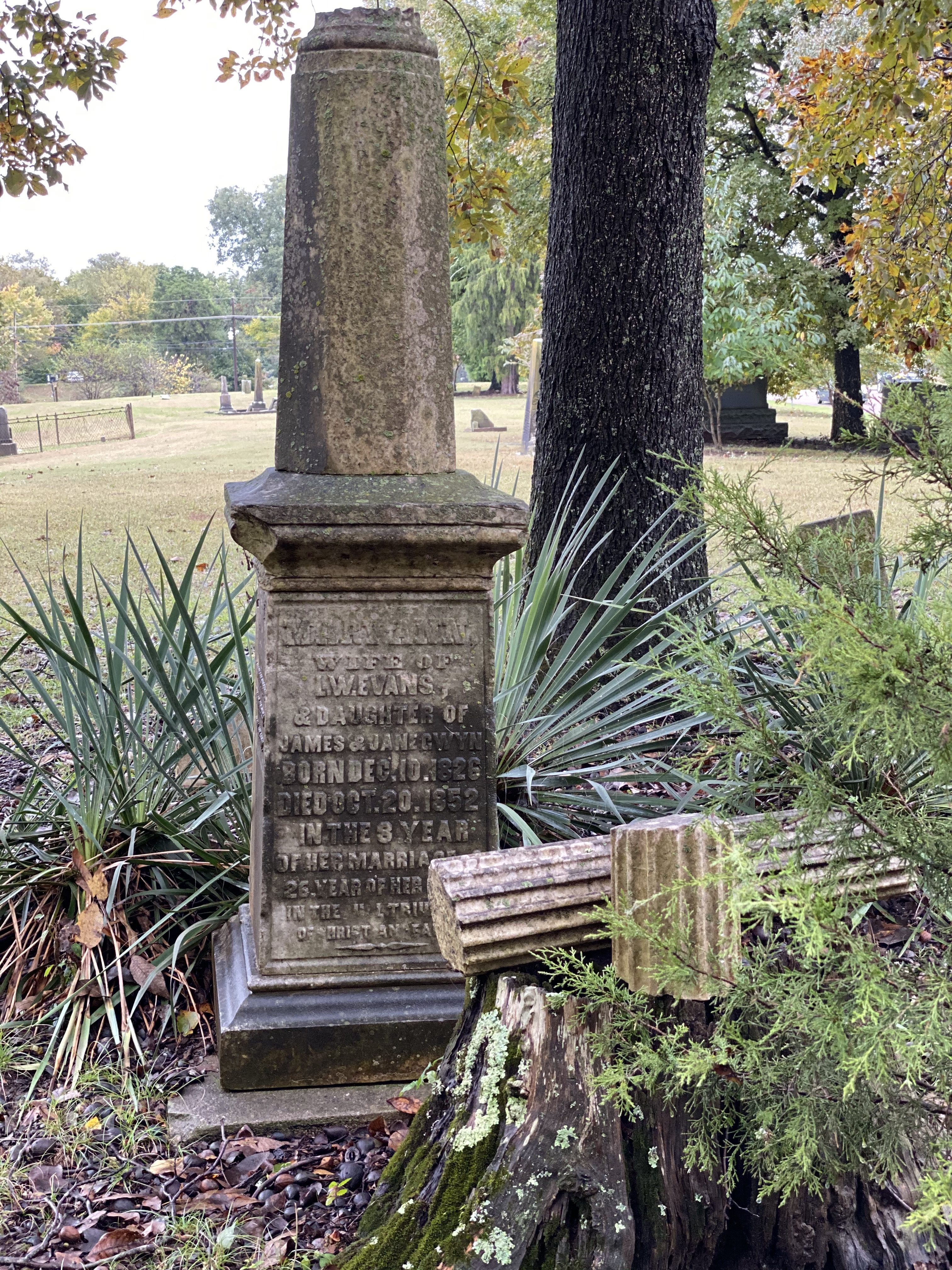 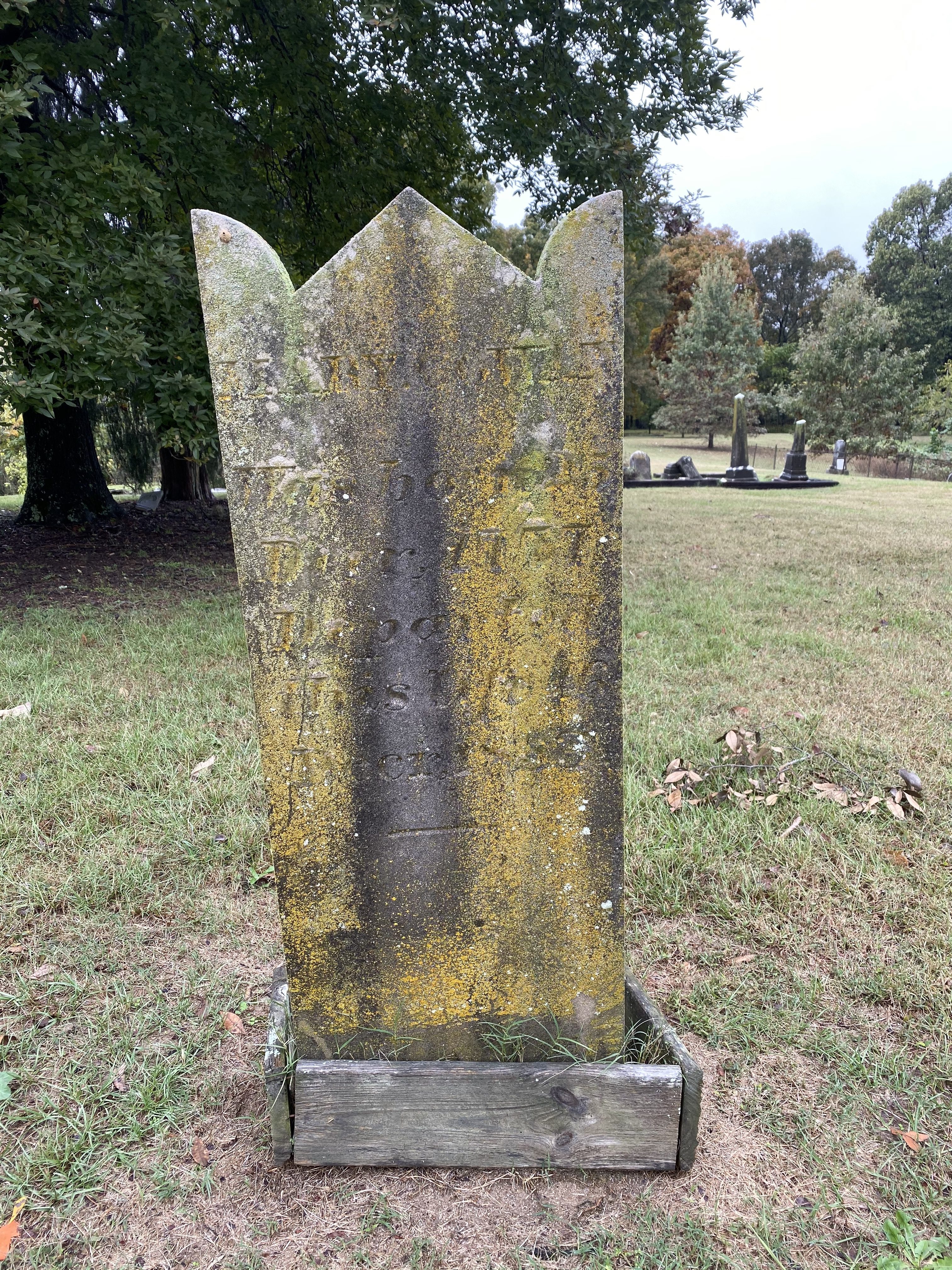 There was a further decrease in the monuments, during the 1860s Civil War and 1870s Reconstruction and Redemption. Only 5 graves were marked in the 1880s and only 3 in the 1890s. Use of the public cemetery, at least by whites who could afford tombstones, was obviously in steep decline. Part of this decline might be explained by the dislocation caused by war and the failed Southern economies of the war and reconstruction era, which took well over a generation to recover. It may also be explained by population movements, as part of the native population, whites as well as Freedmen, sought new farms in the newly opened lands of Arkansas, Texas, Oklahoma and Kansas. Conversely, it might indicate that the cemetery was becoming filled. The later 19th century saw a continuation in the trend of speculation-fueled boom and bust cycles, with major downturns in the later 1870s and the 1890s. These periods also saw periodic reduced means to erect monuments and increased inter-state mobility comparable to the pre-war “panics.”

However, these assumptions about the decline of Springhill Cemetery can at present only be based on what is available for study above-ground. There may be underlying issue of race and/or class that are not evident in the pattern described above. Very few former slaves could afford monuments, so if the cemetery continued in use by the urban freed population in the later 19th century, there might be a significant cemetery population that is not evident today because of the lack of permanent monuments. Such graves were probably marked by posts, boards, plantings or small portable items like local sandstone slabs, ceramics, glass vessels or sea shells, which have left few above-ground traces. A final issue to consider is the 1878 yellow fever epidemic that nearly destroyed the town of Hernando, as well as many other settlements, including Memphis, which declined so precipitously that it lost its city charter. The shared small tombstone of two elders of the black community, Thompson and Nelson is directly attributable to the epidemic.

The Woods as well as Stewart were immigrants to the area (the Woods from England and Stewart from central Mississippi); the last two 20th century graves, before the 2006 burial of N.C. Ferguson, Sr., are George Wood and Lee Stewart. That they were contemporaries and not natives may be significant in evaluating why Stewart chose to be buried here in what was an essentially abandoned cemetery in 1940, leaving a way open for the related Ferguson family to continue interments here 60 years later. The elderly Amanda Lauderdale Robinson was interred in the Robinson family row of mid 19th century graves with her contemporaries, after the family had otherwise ceased to use Springhill.

Graves of Tennesseans found in Monterey